New Year’s Resolutions are fraught with peril…can anyone really promise to do something for an entire year? Instead, let’s say I’ve decided to fulfill a long-standing wish to broaden my connections to other writers I admire. And so, voila!  Between the Lines: Interviews with Authors.

Let’s face it; writers are a solitary lot. It takes a lot of “alone time” to create a novel, socializing is something we usually do after the deadline has been met – if at all. BTL is an attempt to break out, make some new friends and introduce you to some writers whose work is worth checking out.

First up for 2015 and known, according to her Goodreads profile to keep a machete under her bed, is Mira Grant, also known as Seanan McGuire. I discovered Mira and her Newsflesh Trilogy, which combines several things I like in a story: zombies, politics, blogging, and a kick-ass female protagonist. What’s not to like about a woman who can outride a mob of the undead on a dirt bike? Her attention to detail and scene setup of a Bay Area (and world) ravaged by a deadly virus was truly riveting.

Seanan is a prolific writer, with many titles and accolades to her name. Which makes her agreeing to take time out to answer our questions for BTL all the more gratifying! Thanks again Seanan for helping us kick-off the column. 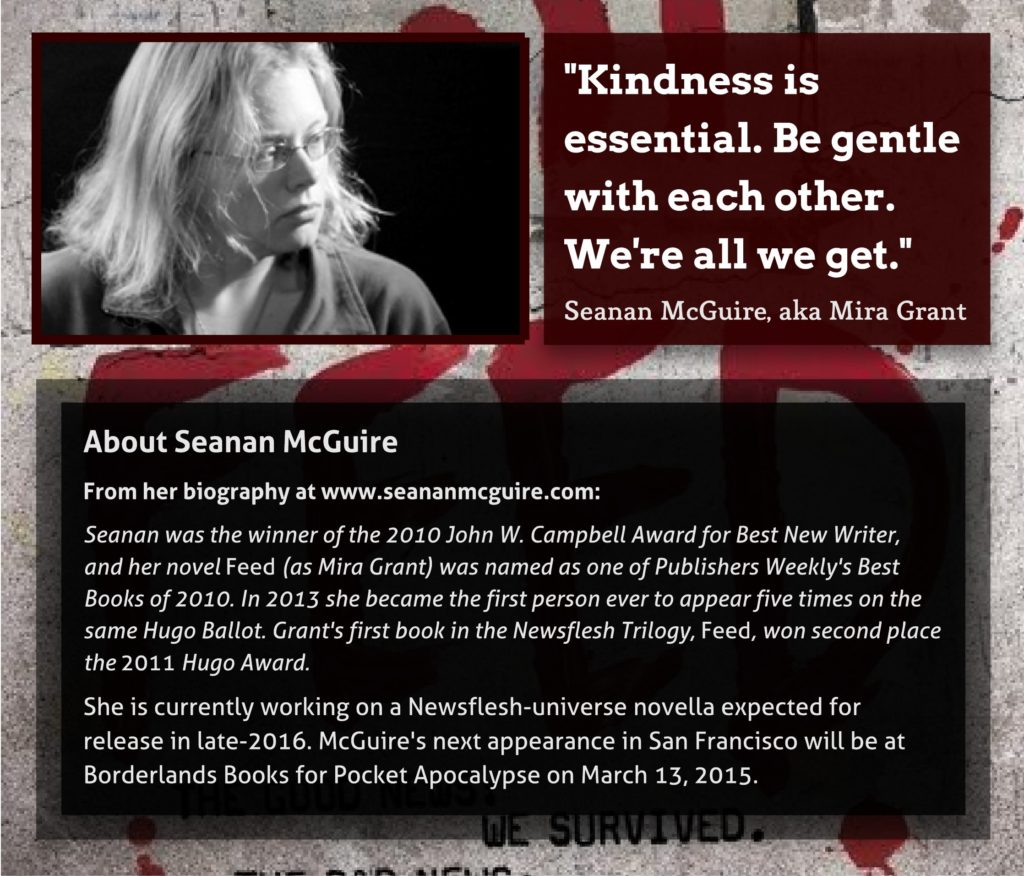 1. As a woman in a male-dominated genre, what lessons have you learned and what advice do you pass on to other women in the genre?

You have to remember that this isn’t a zero-sum game—your success is not my failure, and vice versa.  You have to keep from turning bitter when men are rewarded for things that will get you criticized.  And most of all, you have to be kind.  I don’t ask people to be nice.  Nice is often artificial.  But you have to, have to be kind.

2. In your Symbiont, Dr. Cale reminds me of the scientist, Delia Surridge, from V for Vendetta and fans of Feed have drawn parallels to Walking Dead; how do graphic novels inform your personal writing style?

They don’t, really.  I write comics, with my first title—The Best Thing—coming from Thrillbent later this year, but I don’t read comics and think “oh, this needs to be in my novel.”  They’re very different mediums.

3. What are your favorite comics/graphic novels?

I’m really into The Wicked & The Divine, and I adore all things X-Men. I am an unrepentant Marvel girl.

4. In a Reddit AMA from 2013, you say about the characters of Parasite, “I just wrote the people I know.” How do the real people in your life inform and inspire your fictional characters? Who/what helped inspire Sal?

I was referring to the diversity of my casts, not the specific characters.  None of my protagonists are based on anyone else.  They are fictional constructs.

5. Do you have a favorite fictional female character? What would a conversation between her and Sal look like?

Yes, I do, and it would be very awkward.  Sal doesn’t do small talk with strangers.

6. Which authors did you read growing up? What about their stories appealed to you?

Everything.  I read the Pleasant Hill California library’s fiction section.  I read everything.  And what appealed to me was that they were books.  I mean, there were authors I sought out more than others, but honestly, I didn’t learn to have discriminating tastes until I was in my late twenties.  I just wanted to read.

7. You have several albums out and have won awards for your songwriting. How is writing music different than writing a novel?

Length…?  Also, I don’t usually set my novels to music.

8. You’ve mentioned in other interviews that among your favorite places are Disneyland and haunted houses. If you had a choice, which one would your teenage-self prefer to work at and why?

Neither.  My teenage self, given a choice, would stay home and play Mage: The Ascension with her friends, and watch a lot of anime and horror movies.  My teenage self was not into crowds.  Neither is my adult self, honestly.

9. Both of us have found time to work professionally and be an author. What challenges have come from trying to do both and how did you overcome them?

I overcame the challenges—exhaustion, illness, lack of personal time—by quitting my day job the second it was feasible, and never looking back.  I needed to sleep.

10. What is the goriest, nastiest, most repulsive thing you’ve ever seen in person?

I signed a bunch of NDAs that sadly mean I cannot tell you.

If you haven’t had a chance, add the following Mira Grant to your Goodreads To-Read shelf and drop me a line to share your thoughts! Stay tuned for our next post when we get in touch with San Francisco’s prominent crime novelist and mastermind behind the Miranda Corbie Series, Kelli Stanley. 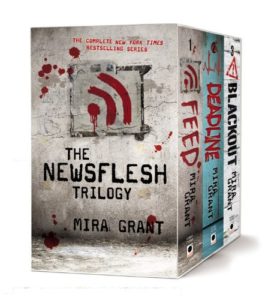 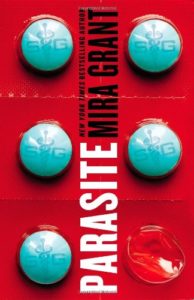 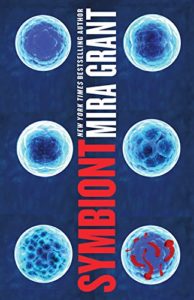